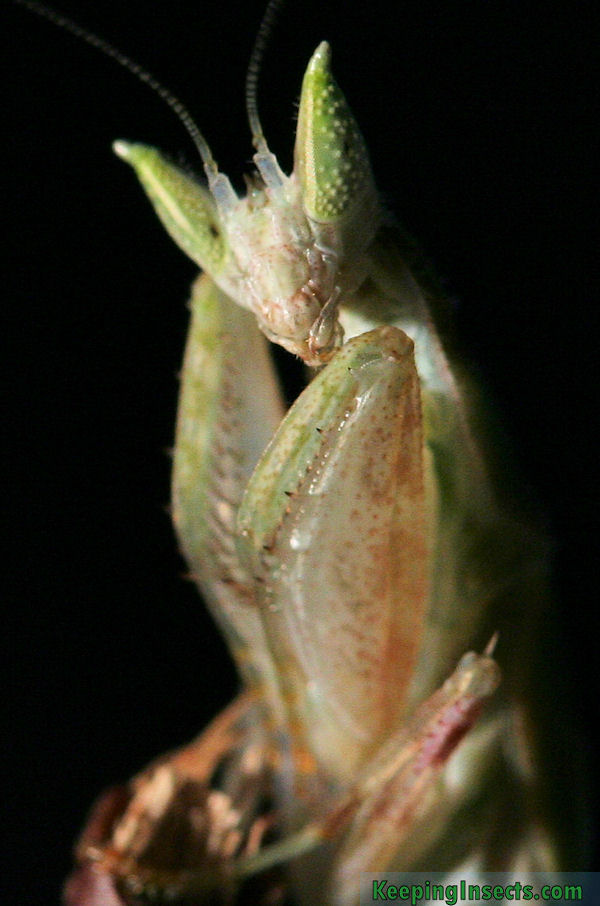 Appearance of the Gambian Spotted-Eye Mantis

This species of praying mantis has a white to creamy underside of its body, a mid to dark green back and shiny green wings. In adult P. virescens mantids you can also see some pink accents and an orange patch under the wings. The hindwings of the adult mantis are bright red. These red wings are used as a confusion mechanism for predators. If the mantis is sitting idle it looks green, but when it spreads its wings it will show bright red coloration that can be confusing for a predator (like a bird or chameleon).
This kind of praying mantis remains very small. The adults are about 3 cm long, that’s a bit longer than one inch.

Pseudoharpax virescens is very ‘confident’ for its size. They easily attack prey much larger than themselves. If a prey is seen, it is pursued with a typical vibrating hunting walk. The vibration causes the mantis looks more like a part of the environment, like a leaf or branch moving in the wind, than a predator. Once it has approached close enough to its prey it will catch it very quickly. 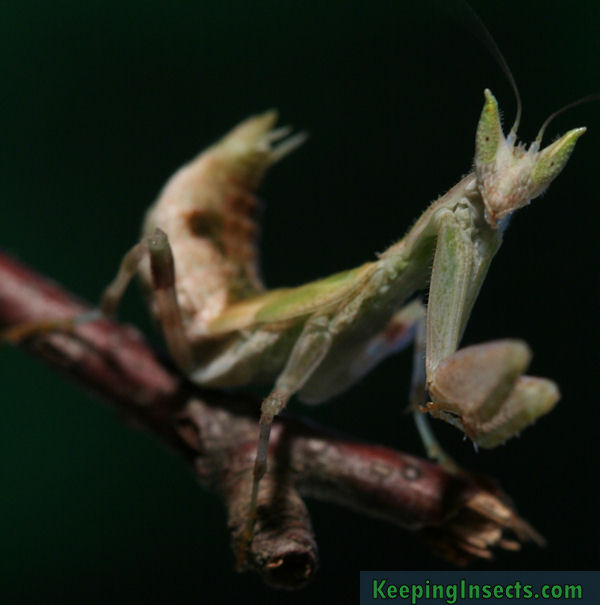 The ideal temperature is about 24 ° C, but can vary between 20 ° C and 30 ° C. At night you can allow the temperature to drop to around 17 ° C.
This species has a required humidity of about 50 to 70%. For most enclosures this is achieved misting with clean water once very 3 days. How often you need to mist depends on the ventilation of your terrarium, more ventilation means more spraying.
As s with all species of praying mantis, this species needs an enclosure that is at least 3 times the length of the animal in height, and at least 2x the length of the animal in width. For an adult this means is at least 9 cm in height and 6 cm in width. A nice size for a terrarium would be 15 x 10 x 10 cm, so there is room for lots of fake plants and perches. Larger is always better, as long as you know the mantis still finds its food.

This species is cannibalistic, like almost every kind of praying mantis. It is adviced not to keep more than one mantis together in one enclosure. Very young nymphs (up to L3) can still be kept together, if well fed. 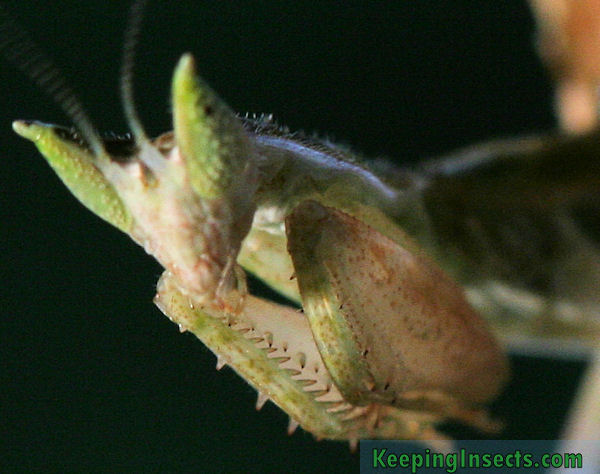 It is possible to breed the Gambian Spotted-Eye Flower Mantis in captivity. It is not that hard, even though some other species are definitely easier to breed. This is how you can breed with this manti species:

First you have to make sure you have males and females of the same age. The females of this species are slightly larger than males as adults. The gender of older nymphs and adults can be determined based on various characteristics. The length of the antennae can be seen if you’re dealing with a male or a female. The antennae of the male are longer and wider than of the female. The base of the antennae are orange-brown in males for the last two instar stages, while that of black females. From around instar level L4 you can count the number of segments on the abdomen of the mantis. Females have six, while males have a 8. This method of sex determination is an early nymph stage, but can sometimes be difficult for the untrained eye. To read more about checking the sex of your mantis, check out our Male or Female mantis? page

Approximately 2 to 4 weeks after the last molt, a mating attempt should be made. Make sure that the female ate a lot before the male is introduced. It is good to distract the female with some food when you place the male with her. Mating can take several hours. There is a high risk of cannibalism for the male, as the Gambian Spotted-Eye Mantis females can be very aggressive and always hungry.

The Gambian Spotted-Eye Flower Mantis female produces small ootheca with around 15 eggs each. The ootheca are light brown in color and deposited on branches or the top of the terrarium. Keep the ootheca the same as the parents and make sure the humidity is high. To read more about keeping ootheca of a mantis, read our page taking care of mantis eggs. 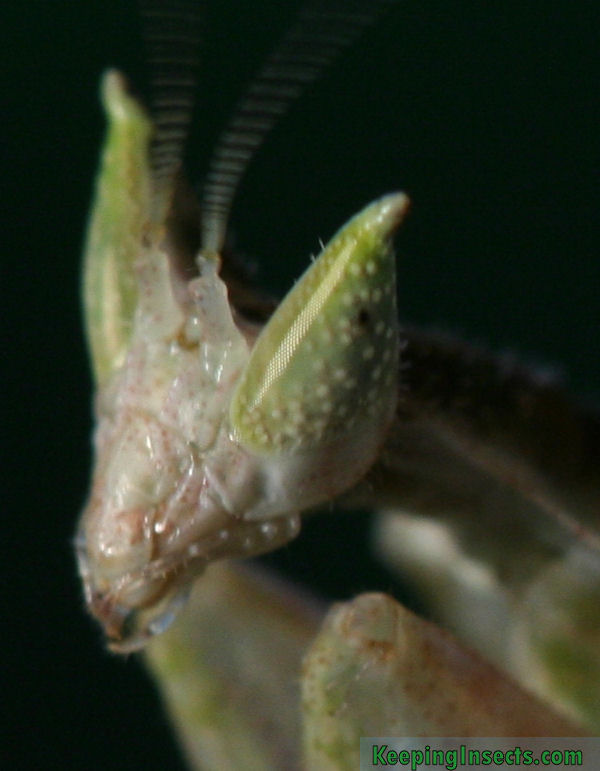 Head of a subadult female of Pseudoharpax virescens