This may be one of the most famous mantis species: The Devils Flower Mantis or Idolomantis diabolica. It’s amazing colors and size make it the most stunning mantis there is. It’s big and when adult has beautiful white with green markings, a big shield on its back and an amazing display behaviour showing red, white, black and blue markings.

This species is also infamous for its high price and difficulty in keeping and breeding. This mantis species occurs in Africa, most notably in Tanzania. 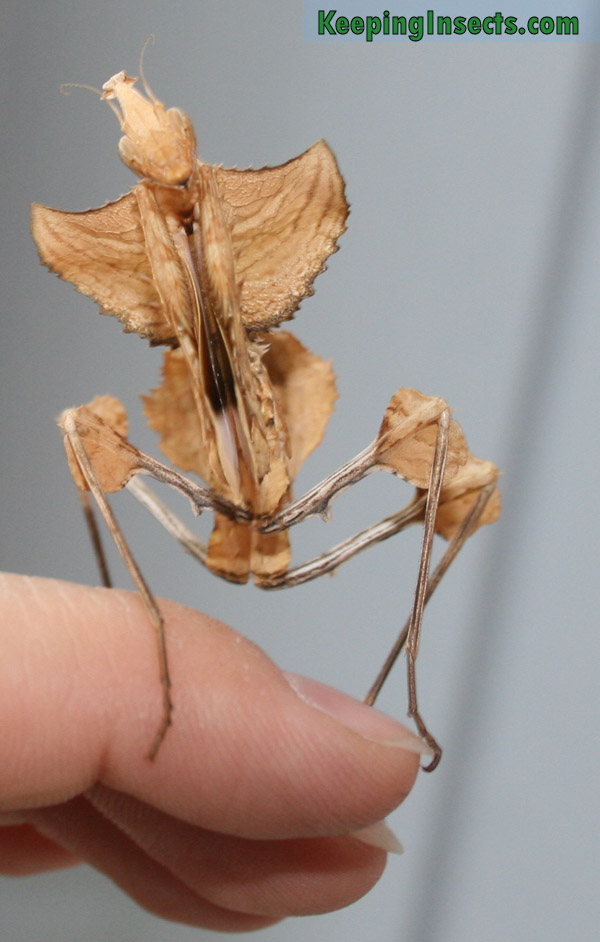 Appearance of the Devils Flower Mantis

Newborn nymphs of Idolomantis diabolica are shiny black in color. This is probably to mimic ants in nature, to deter predators. Older nymphs are beige to light brown in color. The color is pretty dull and without a clear pattern. When adult the colors are completely different and very impressive. On the outside this mantis is white-and-green striped. On the inside of its predatory arms this mantis species has bright red, white, blue and black markings. When resting these colors cannot be seen, but when it feels threatened it will raise its body and point its arms upwards, showing the bright colors.

The amazing colors are not the only impressive feature of the appearance of the Devils Flower Mantis. The older the nymphs get, the more pronounced the appendages on the body become. On the back of the body a huge shield is formed, looking like a dry leaf. The head and abdomen has smaller protrusions mimicking dead leaves.

This mantis species will become very large. The body of an adult female will be about 10 cm in length. The males will get the same body length but have a more slender body and huge feathered antennae.

Behavior of the Devils Flower Mantis

My Devils Flower Mantis doing its deimatic display in its cage

Although this mantis looks very impressive, deep down inside it is a lot less brave then you would guess. This species of mantis is very skittish and is stressed out easily. A stress reaction of this mantis consists of either running away in a panic frenzy, bumping into anything around it in the enclosure, or of showing its beautiful deimatic display. An Idolomantis diabolica mantis can get stressed by being handled and by being disturbed by people or pets close to its enclosure. When not disturbed this species is very quiet and will generally not move. It will grab prey insects quickly when they come close by, but they generally will not move to stalk them. They are a true sit-and-wait predator.

The behavior this species is known most for is its deimatic display. Deimatic display is the name for any pattern of threatening or startling behavior, such as suddenly displaying conspicuous eye spots, in order to scare off or momentarily distract a predator. The Devils Flower Mantis shows a deimatic display not often seen in other species. It will raise its front legs and tilt them outward. This exposes the area on the inside of the legs. This area is very wide and brightly colored in red, white, blue and black. The mantis will move its body and arms left and right to confuse and/or scare its predator. Adult Idolomantis diabolica mantises will also open up their wings to appear larger. 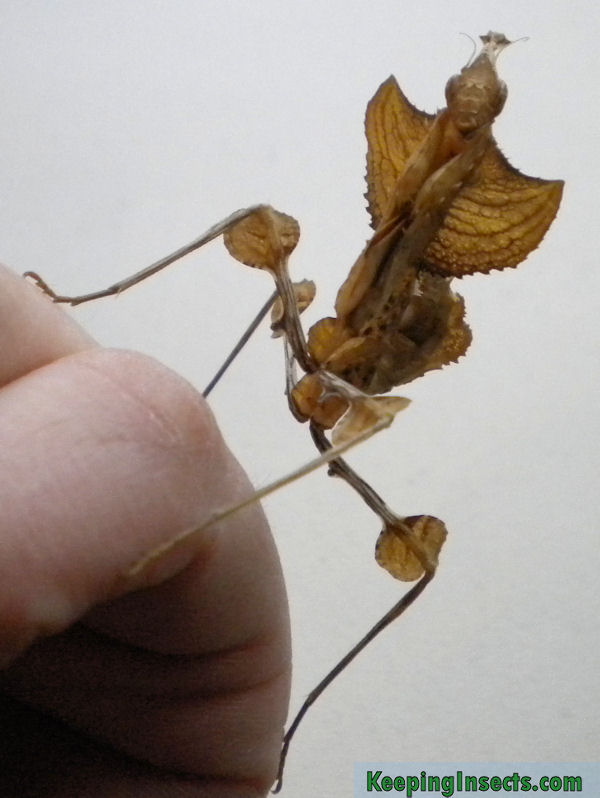 The Devils Flower Mantis only eats flies. It can eat other insects, but these are harmful to the mantis and should be avoided. Young nymphs will eat fruit flies, older nymphs will eat blue bottle flies, green bottle flies and moths. Any mosquitoes or other small flying insects are also eagerly eaten by this mantis.

This mantis needs a continues supply of flies. Do not let this species without prey for more then two days. But don’t crowd the enclosure with flies, this will greatly disturb this skittish mantis and will disrupt correct molting. 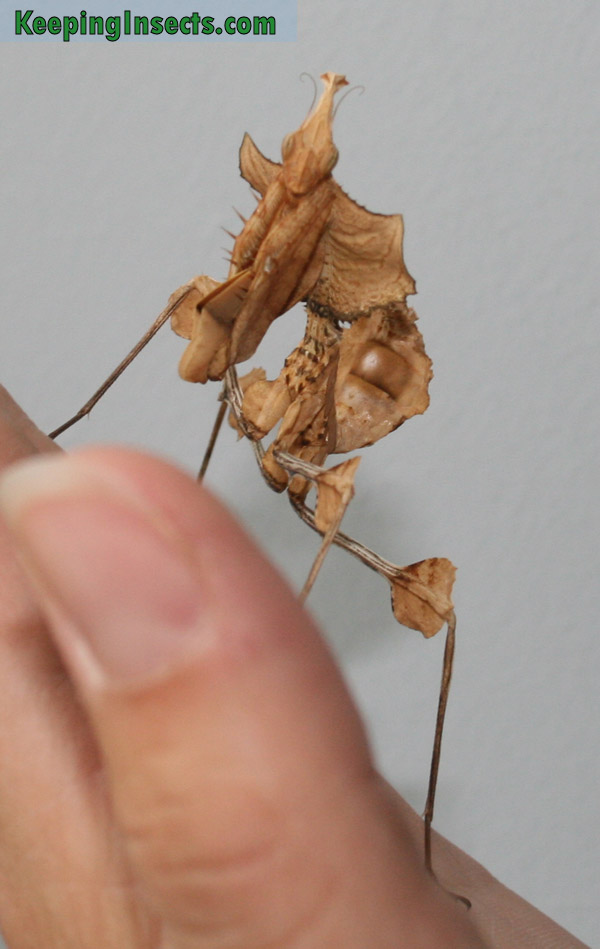 Temperature and humidity for the Devils Flower Mantis

The ideal temperature for the Devils Flower Mantis is very high, around 35 °C (close to 100 degrees Fahrenheit). You can vary it between 32 °C and 40 °C. In this night you can lower the temperature to 20 °C. The best way to heat the enclosure is by using light bulbs.

Air humidity is very important for Idolomantis diabolica. It needs a high air humidity, but also a lot of air circulation. The best method is to open up the cage for ventilation during the day and closing it during the night. In the evening you can spray the enclosure to increase air humidity. This species is one of the hardest species to keep, many times molt or unknown reasons will cause all Idolomantis nymphs to die before adulthood. 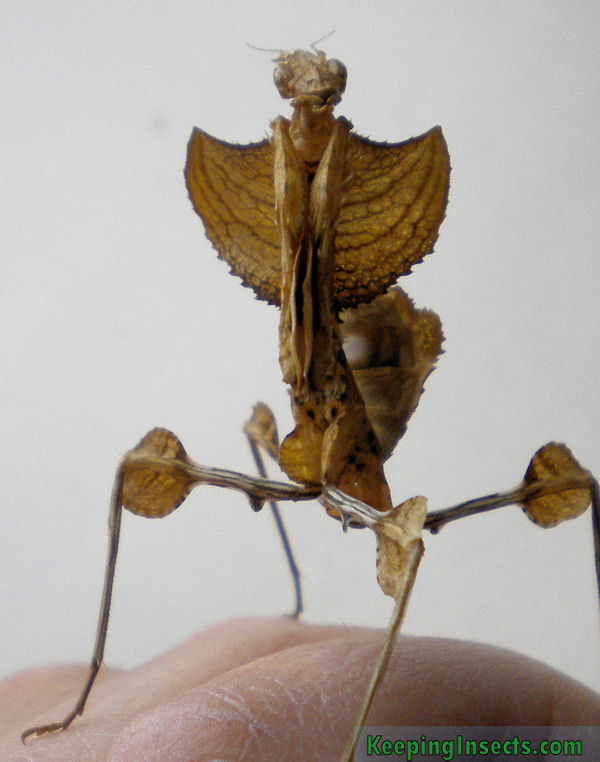 Like any mantis species, the cage for Idolomantis needs to be at least 3 times the length of the mantis in height and 2 times the length of the mantis in width. Devils Flower Mantis need a lot of space, so its better to increase the size of the enclosure some more. For an adult Idolomantis you should provide at least 40 cm in height and 30 cm in width. This species can be housed together as cannibalism is minimal in this species. If you choose to keep these mantises in one enclosure, make sure its big enough for all of them. The bigger the better.

Decorate the enclosure with a lot of sticks and dry leaves. This mantis really appreciates hiding material like dry leaves because of its skittish nature. Devils Flower Mantis is unable to walk on glass. Its feet lack the “suction cup” enabling other mantis species to walk on glass and other smooth surfaces. therefore you need to provide this mantis with mesh housing or with a lot of sticks and rough surfaces to climb on and hang from when molting. 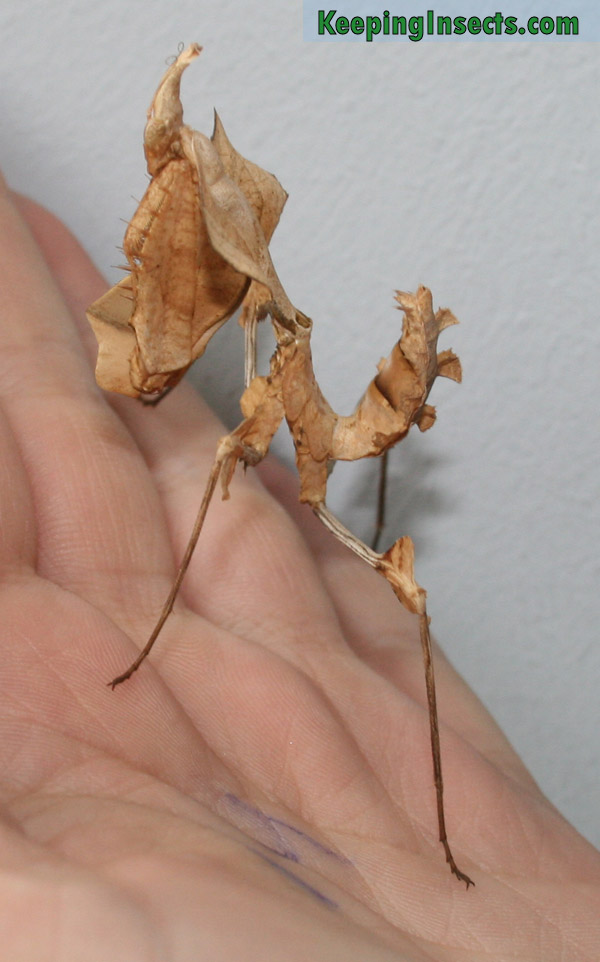 Breeding the Devils Flower Mantis is a challenge. First you need to find an adult pair. The best way to distinguish males and females when they are adult is by looking at the antennae. The males have long a feathery ones, the females have thin and short ones. The wings of the males are also much longer than the wings of the females. When this mantis is not yet adult you can see the difference between males and females by counting the number of abdominal segments.

Around 2 to 4 weeks after reaching adulthood the Devils Flower Mantis is mature enough to mate. If you house them together, they will know when to make their move. Make sure both the male and female have had plenty of flies to eat. If you don’t house them together, this is the time to do so. Because this species is so skittish, introducing the male to the enclosure of the female will provide enough stress for it to not be in the mood. Don’t wait for mating, it will happen naturally. Usually at night.

Female Devils Flower Mantises produce around 7 foamy egg sacks called ootheca. The first one will be produced a few days after mating, the others every 2 – 3 weeks. You can keep the ootheca on the spot that the female choose for it. You can remove the adult mantises from this enclosure when the ootheca is close to hatching. Adults will eat younger nymphs of the same species, or their own offspring. If you want to remove the ootheca, you can remove them 3 days after they are produced. Keep them in a container with the same conditions as you keep the adults. Molt is killer #1 for ootheca, so make sure the container is properly ventilated.

Click to enlarge. Thanks to Léon en Debbie for letting me use their pictures. 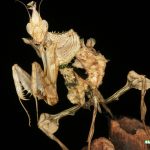 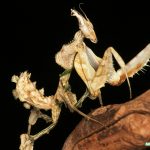 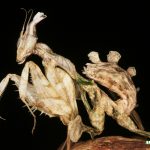 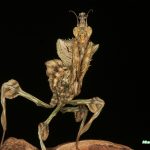 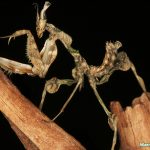 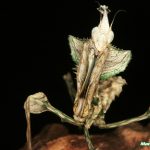 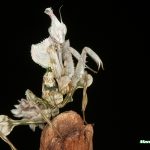